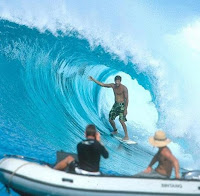 Seeing the conditions and situation of Batam Island, geographical factors are extremely suitable to be developed Malay cultural tourism, food, investment and natural. In fact, Batam is surrounded by ocean water has the potential to develop tourism, especially in coastal locations Barelang (Batam, Rempang and Galang).

Hilly landscape, surrounding islands and exotic beaches in the area Barelang, has the potential to increase the number of tourist visits and be able to leverage targeted 7.7 million foreign tourists expected.

Promotion Director of the Interior, the Ministry of Culture and Tourism of RI M Farid Moertolo say, facilities and basic infrastructure in the region owned Batam Rempang and Galang such as roads, bridges, lighting and so forth has to be developed.

"Just how Batam package and polish to attract, by maximizing the existing potential for increased tourist traffic," said Farid amazed when visiting the region in a series Barelang Coordination Meeting of Domestic Tourism Marketing at the Hotel Goodway's Sumatra region last weekend.

Farid who was accompanied by Head of Batam City Tourism and Culture Guntur Sakti explained, Barelang is a region with very interesting and exotic like Bali. No one, Batam is the third highest area visited by tourists and need to be maintained, after the Bali and Jakarta.

Gunter said the level of 1,007,446 tourists visited Batam less than target of 1.2 million visits in 2010 had a maximum result achieved through various programs created and executed.

And in 2011, customs has been programmed to increase the number of tourists visit the natural attractions and water, by maximizing the various limitations that are owned. "We are going to package this Barelang region as a tourist destination, especially water attractions. And in Batam will simply serve as a regional MICE (meetings, incentive, conference and exhibition). But again, we will issue a limited budget. However, with limitations we have, we will maximize with all the capabilities that exist, "said Gunter.

Emery, Head of Culture and Tourism Program Office recognizes the advantages of Jambi Province owned Barelang Batam in coastal areas that are not owned any other region including Jambi. He argues, region to be developed as tourism potential of water as desired Guntur. "Barelang coastal area is quite nice, and very potential to be developed as a tourist area of ​​water. The area is not owned by any other region," he said.